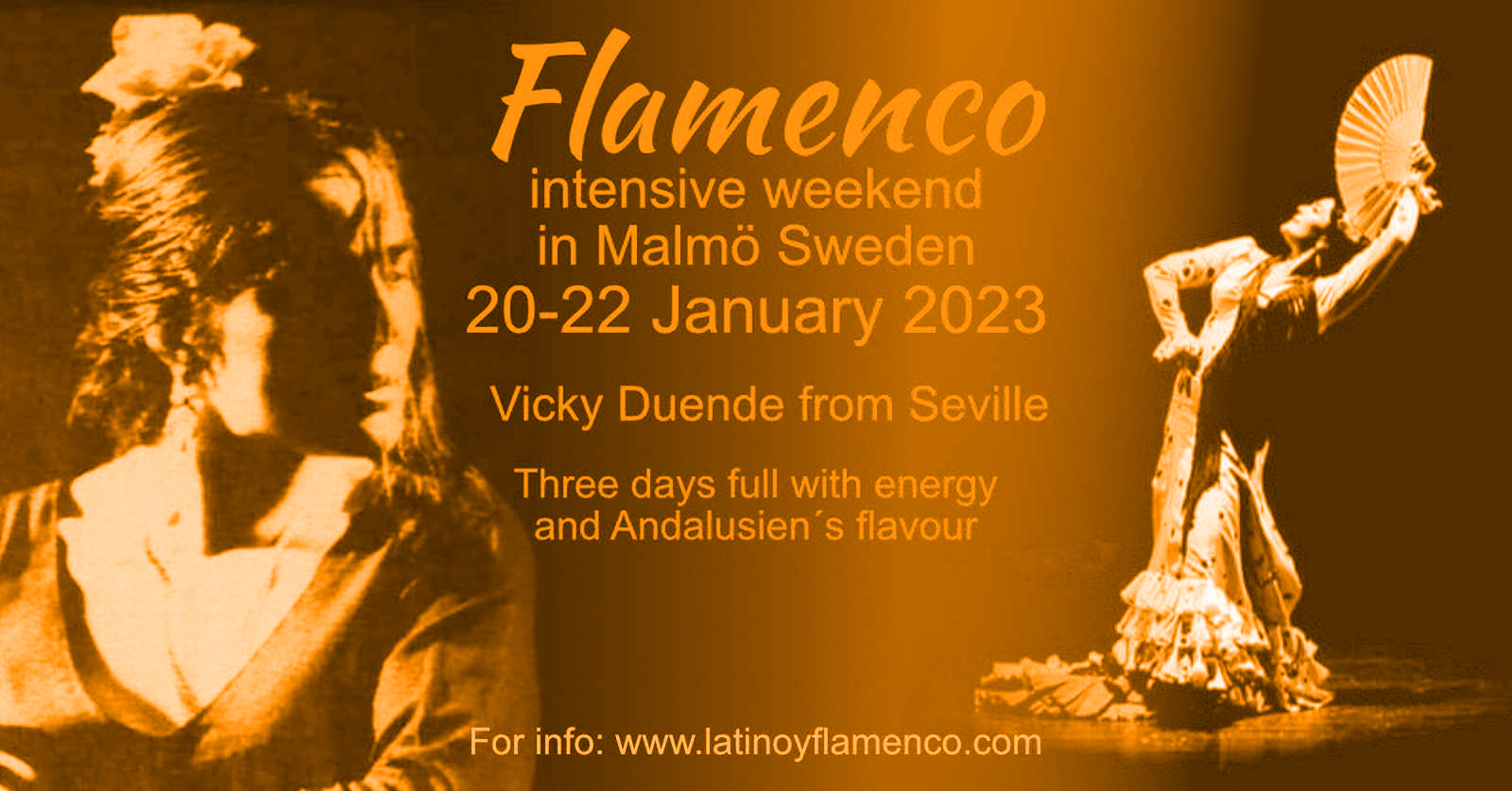 We have the pleasure to introduce Victoria Duende born in the neighborhood of Macarena in Seville Spain one of the flamenco main centers in Andalusia.
We are so thrilled to welcome Victoria and you to an energetic flamenco weekend which we have chosen to name ”Flamenco duende weekend” due to the fantastic charisma and flamenco energy that Victoria puts into each and every lesson.
Maria Victoria Perez Varea a k a La Vicky (as many call her) is
An active bailaora, choreographer and teacher in Madrid with a long and impressive artistic CV.
Since very young age she has co-worked with some of the greatest in the flamenco elit in Spain. Among her important collaborations may we name her participation in flamenco icon Mario Maya’s dance company already at the age of 17. She made her professional debut at the age of 15. Among her teachers at then age of 13 she got the instruction of the legendary Matilde Coral.
She is today very active in the flamenco stage in Madrid where she currently teaches at the world famous Centro de Arte Flamenco y danza Española Amor de Dios.
Among her latest collaborations we can mention her active participation both acting, singing and dancing in the successful theater production of Bizet´s Carmen under the direction of Rafael Amargo with whom she is having several projects going on.
We are excited to receive Victoria Duende in Malmö and start the new year with loads of flamenco energy and joy.
Do not hesitate and register today - your flamenco life will have a before and after once you have participated in Victoria Duende´s classes.

Welcome to the Flamenco duende weekend in Malmö Sweden at Arnberg's Dansstudio 20-22 January 2023.
Start the New year with a weekend full with energy and flamenco passion. Come and learn and develope your skills in the beautiful art of dancing, claping and singing.

Victoria will guide us into the fascinating world of combining the dance and the singing with the maximum of connection with the soniquete (rythm).
These workshops are dor you who wishes to deepen your knowledges, skills and understanding the mutuality between the singing (el cante) and the dancing.
Victoria Duende with her expertise and charisma is the right person to teach us this so important part of the flamenco culture.

The technique in the service of art!
These classes are meant to give you the special character that a flamenco dancer needs to have when presenting a dance.
Each dancer has got an own personality and each flamenco palo has got it´s own character.
It is a constant aspect to learn, develope and cultivate in the art of dancing.
It is the posture, the lines, the flow of the arms, the "painting" with the hands, it is not least the face expresing a feeling and telling a story...
That is what we will be working with in these workshops. You will continue discovering the flamenco duende in yourself.

Baile por caña is one of the deepest flamenco palos. Now you can learn this dance in an intensive three days-course and enrich your flamenco repertoar.
Regarding the musical form that the Caña presents, we can find certain similarities with the Soleá in terms of compass, verse and tonality. La Caña's melancholic cante begins with a long and courageous quejío, “ay!” followed by a first paseíllo of woes. The paseíllos de ayes that are repeated six times, and are interpreted in perfect agreement with the corresponding guitar chords. In the current form, The cante por cañas begins with an octosyllabic couplet of four verses which is followed by a quejío, which is expressed simply with the "a" or the "y" of the "ay", which is repeated several times, ending with a macho.-
Courious about it?! Register today and grant your spot!
Alegrías

Alegrías de Cádiz
Level: Initiated and Intermediate
During these two workhops Maria José is going to teach you the alegrías palo.
This palo is rich in rythmnics and expresivity as well as challenging footworks.
If you are familiar with the 12-beat structure and would like to explore the special flavour of th alegrías of Cádiz then this class is for you.
Maria José will enhance your flamenco dance since she is a very talanted and thorough teacher.
Date: Saturday 27 November
Time: 10 - 11.30 h
Date: Sunday 28 November
Time: 10 - 11.30 h
Guajiras 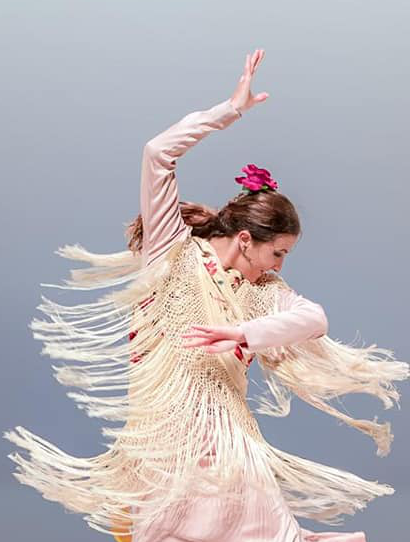 Guajiras
Level: Intermediate
Improving the technique and developing the expressivity when dancing por guajiras.
Like all flamenco palos, the guajira has a clear structure and consists of beginning, middle and end. The guajira usually begins with an introductory section (falseta) by the guitar which is based on the basic guajira harmony. The guitar resolves into the characteristic guajira chord pattern, over which the singer will sing the instantly recognizable salida. The dancer enters during the guitarist’s falseta or during the salida. The fluid nature of the choreography also allows for improvisation within the structure, including danced falsetas, and escobillas performed a palo seco.
This we will have the privilege to get served by Maria José.
Date: Saturday 27 November
Time: 11.40 - 12.40 h
Date: Sunday 28 November
Time: 11.40 - 12.40 h
Bulerías de Jerez 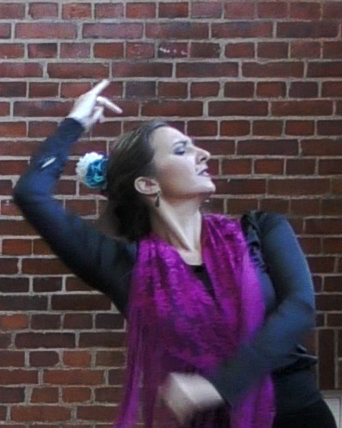 Bulerías de Jerez
Level: Intermediate/advanced
The bulería de Jerez coming directly from its original source.
In these two Master classes Maria José will share with us the main secrets of the enchanting style: Bulería de Jerez.
We are going to get some special instruction in how to dance to the singing (bailar al cante). Which makes the big difference when dancing builería de Jerez.
A lot of energy, temperament and above all art in her dance will we have the chance to receive during the Flamenco 100% weekend.
Bulería technics and rythmics and of course ”pataitas por bulerías” are the main ingredienses in the cocktail she is preparing specially for us.
Date: Satuyrday 27 November
Time: 13-14.30
Date: Sunday 28 November
Time: 13-14.30

The classes aim to give you deeper understanding of the use of the Mantón and the Abanico in your dance.
Maria José will help you to enhance your technique and enlighten you about the character and flavour of this two Flamenco complements.
The Mantón and the Abanico are a dynamic complement to your dance technique. It enhances the projection of your aesthetics when performing and increases the dimension of your stage presence.
Workshop in: Compass, flamenco palmas and stumps 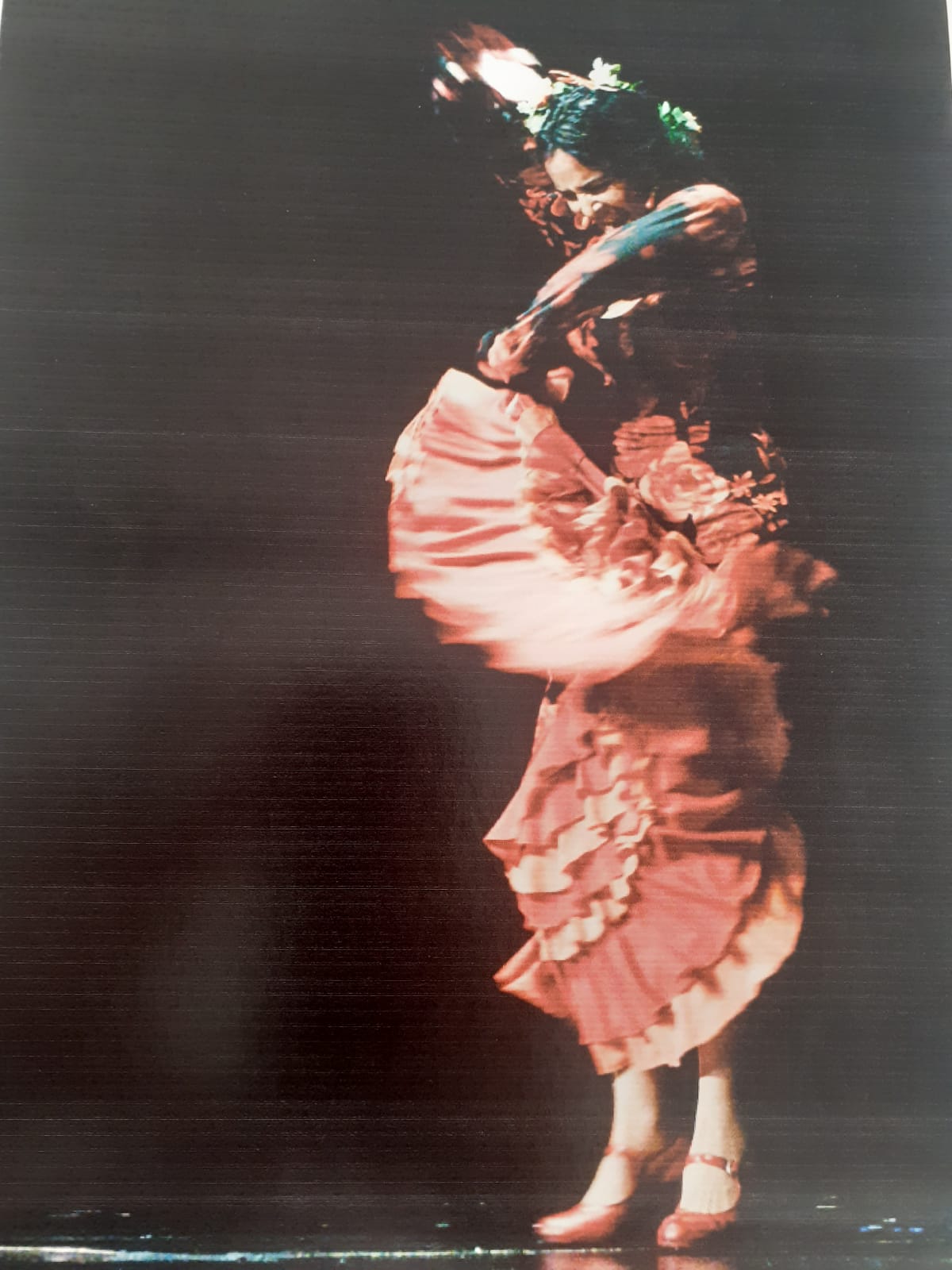 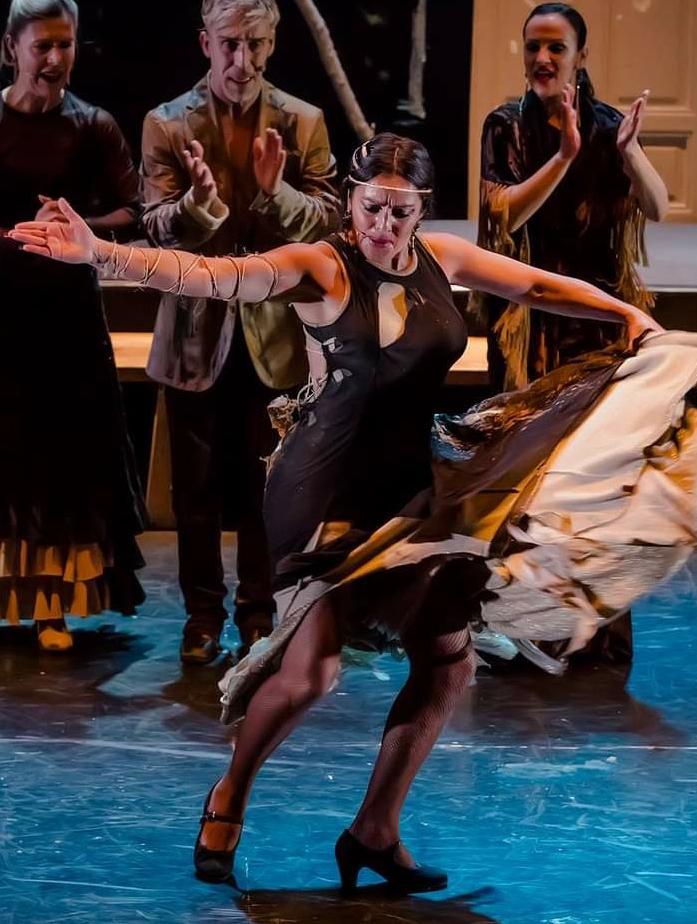 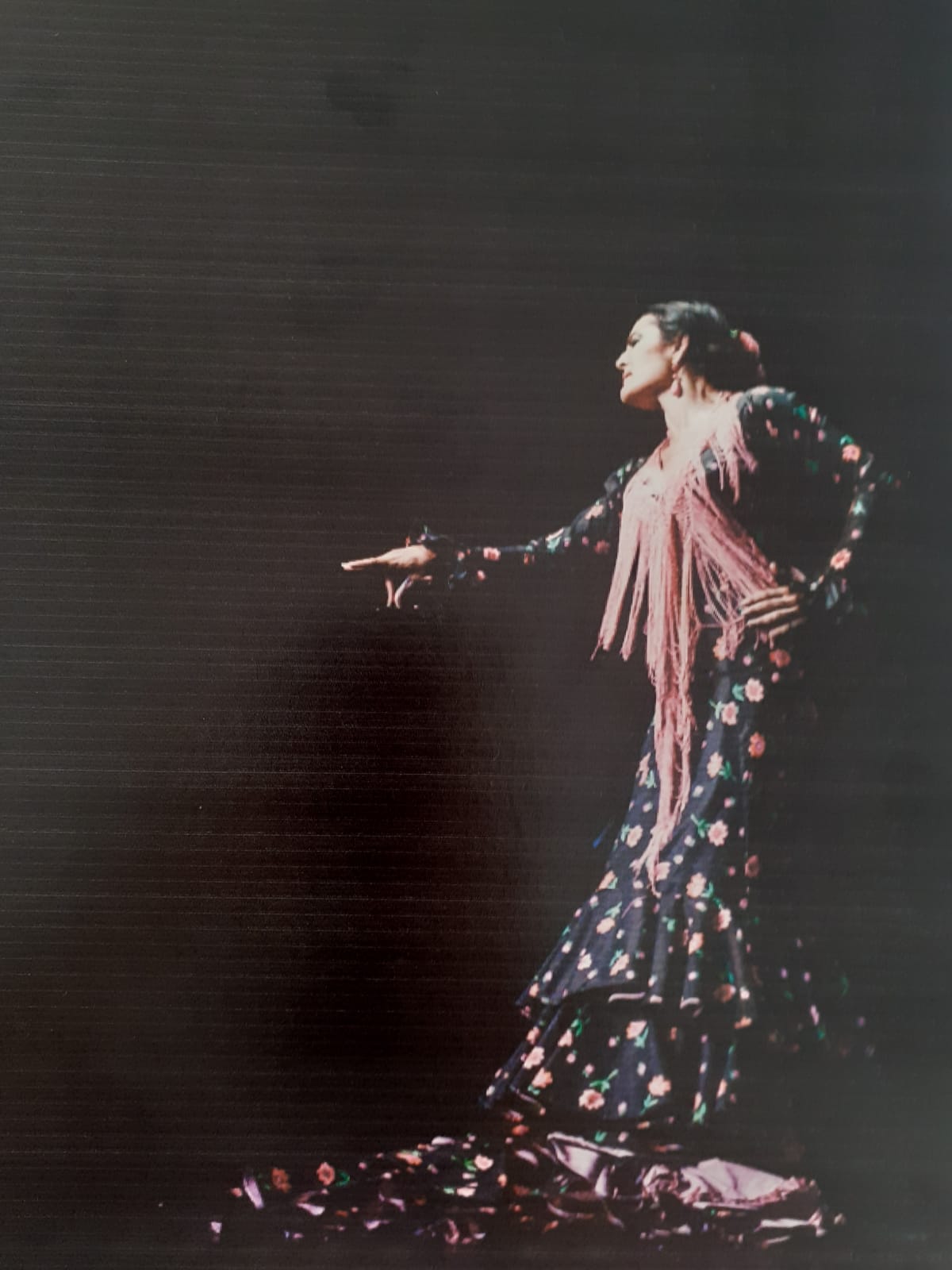 Baile por Caña!
Regarding the musical form that the Caña presents, we can find certain similarities with the Soleá in terms of compass, verse and tonality. La Caña's melancholic cante begins with a long and courageous quejío, “ay!” followed by a first paseíllo of woes. The paseíllos de ayes that are repeated six times, and are interpreted in perfect agreement with the corresponding guitar chords. In the current form, The cante por cañas begins with an octosyllabic couplet of four verses which is followed by a quejío, which is expressed simply with the "a" or the "y" of the "ay", which is repeated several times, ending with a macho. Molina and Mairena believe that the cane presents analogies with other cantes such as: the alboreá, serrana, soleares, polo, etc... there are great similarities with the polo, in fact there was a time when the cante of the reed then the polo was sung, resulting in the link of both songs, heavy and monotonous for those who listened to them. That is why the caña has been a song that has been transformed over time, tending to become a more direct and light song. Regarding dance, according to Manuel de Vargas it was the dancer Antonio de Juana Porrote who danced the Caña, in the first third of the 20th century. However, it was the guitarist Perico el del Lunar, who disseminated this style, adapting it to dance and offering it to the great bailaora Carmen Amaya in 1935 so that she would premiere it in her debut in Madrid. On the other hand, the dancer Pilar López, built a magnificent choreography for a couple based on this cante. Normally the dance of the cane is interpreted with Mantón de manila, Bata de Cola, and Castanets, therefore adding greater complexity to this dance with such melancholic features, which by itself requires great "weight" to interpret it. 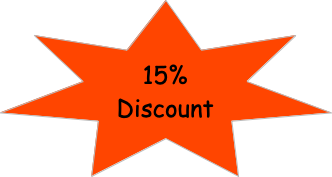 Register here
Registration - payment
Packages options - Make your choice here and pay directly.
Pay options; Payment information:
Bg 5442-1110
Swish 123 375 51 96
You give your name and last name and the package you are registering and paying for.
You can also use PayPal here below (prices without VAT)

See you soon!
Registration - payment
Single options - Make your choice here and pay directly.
Pay options; Payment information:
Bg 5442-1110
Swish 123 375 51 96
You give your name and last name and the class you are registering and paying for.
You can also use PayPal here below (prices without VAT)

See you soon!
Private classes
Private classes!
From thursday 25:th of November evening to monday 29:th of November morning Maria José Franco will be offering private classes for every levels.
For prices and reservations please write to us via e-mail dance@latinoyflamenco.com or via our Facebook messenger
See you soon!
Prices
One workshop: 300 kr.
The whole weekend: 1800 kr.
Friday´s classes 500 kr.
Price for one day (Saturday or Sunday): 750 kr.
Register here
Private classes!
During th weekend when Victora is having classes you can book private lessons via
e-mail dance@latinoyflamenco.com or via our Facebook messenger
Payment information:
Bg 5442-1110
Swish 123 375 51 96
© All rights reserved Latino y Flamenco